On November 15, Mahesh Babu’s father Krishna passed away, leaving a void in the Indian film industry. A number of people offered their respects for the late actor on social media. 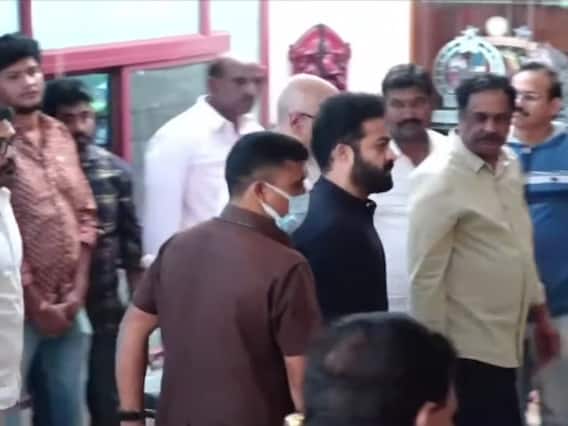 On November 14, around 2 a.m., Superstar Krishna was admitted to Continental Hospital in Hyderabad. He went into a severe cardiac arrest. The iconic actor died after suffering from age-related ailments. The whole Telugu film industry is in mourning following the death of the legendary actor. Junior NTR was also present to pay his final tributes. (Image Source: Twitter) Vijay Deverakonda was among the first to arrive at the funeral. Before paying his last respects to Krishna’s mortal remains, the actor met with Mahesh Babu and expressed his grief. Fans may recall Vijay’s last public engagement with Krishna in September, when he extended his sympathies following the death of his wife, Mahesh’s mother Indira Devi. (Image Source: Twitter) At the burial for his father, Mahesh Babu was spotted sobbing and being hugged by RRR star Ram Charan. The performer paid his final respects to the deceased star’s mortal remains. The RRR actor took to Twitter and wrote, “Heartbroken to hear that Superstar Krishna Garu is no more. He was a legend whose journey will be remembered forever .My heartfelt condolences to my brother Mahesh, his family and millions of fans.”(Image Source: Twitter) Mahesh Babu couldn’t control his emotions at his father’s last rites. The superstar had a difficult year in 2022, as he lost three family members. (Image Source: Twitter) Krishna, whose film career lasted over five decades, had appeared in over 350 films in a variety of roles and was also honoured by the Government of India with the Padma Bhushan in 2009.  Mahesh Babu, has carried on his father’s heritage by becoming one of the top league stars in the Telugu cinema industry. Amidst all others, Pawan Kalyan was also spotted paying his respects to the deceased soul. (Image Source: Twitter) Allu Arjun also paid tribute to Superstar Krishna at his home in Hyderabad. He greeted Mahesh Babu, hugged him, and then went on to offer flowers to the late actor’s dead remains. (Image Source: Twitter) Another of the many eminent people who went to Mahesh Babu’s home to pay their final respects to the mortal remains of his father Krishna was actor Satya Dev. (Image Source: Twitter)